The arrangements for the renewal of the International Group General Excess of Loss reinsurance contract and the Hydra reinsurance programmes for 2015/16 have been finalized. 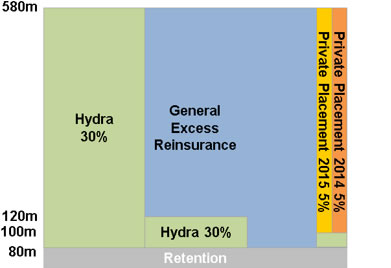 For 2015/16, there will once again be a three layer pool structure with a lower pool layer from US$ 9 million to US$45 million, an upper pool layer from US$45 million to US$ 60 million (within which, as currently, there is a claiming club retention of 10%) and a top pool layer from US $60 million to US $80 million (within which there is a claiming club retention of 5%). The result of the renewal negotiations and programme restructuring is a reduction in reinsurance cost of 8.11% for clean and dirty tankers, 6.05 % for dry cargo vessels, and no increase for passenger vessels or chartered entries. In approaching the reinsurance cost allocation exercise for the 2015/16 policy year, and in accordance with the Group’s general allocation objective, principally that of moving towards a claims versus premium balance for each vessel type over the medium to longer term, the Group’s Reinsurance Strategy working group and Reinsurance subcommittee have again reviewed the updated historical loss versus premium records of the current four vessel type categories. In the tanker category, both the clean and dirty tanker records show a continuing favourable trend of steadily reducing claims and premium since 2004/5. In the dry cargo category, claims and premium have continued to return towards equilibrium. In comparing container and non-container dry tonnage, the objective stated above of seeking to achieve equilibrium over the medium to longer term dictates that a new vessel type category should not be created in the short term, absent a compelling reason to do so based on a sustained claims pattern. The absence of any significant container claims arising during the 2014/15 policy year to date means that there remains insufficient historical claims data to support separate treatment of container vessels from dry cargo vessels in general, for reinsurance cost rating purposes for the 2015/16 policy year. In the passenger category, there were significant increases in reinsurance costs allocated in the 2013/14 and 2014/15 policy years, principally reflecting the very substantial continuing adverse development on claims arising from the Costa Concordia incident. These claims should now be fully, or very close to fully, developed and, in the absence of any further major passenger vessel incidents, the sector should continue to move towards claims/premium equilibria over the medium term.

Updated Industry Guidelines on the Carriage of Seed Cake in Containers

The carriage of Seed Cake cargoes continues to cause confusion and the potential for mis-declaration remains high - with the consequent risk of fire on board container ships. Seed Cake is the term used for pulp, cake, pellets, expellers or other cargo where oil has been removed from oil-bearing seeds, cereals or commodities with similar properties, including all such types of seed meal. It is principally used as an ingredient in animal feeds.
Read More

International Group clubs respond to the US Government sanctions guidance for maritime and related industries.

On 14 May 2020 the US issued a Global Maritime Advisory (“Guidance”) aimed at a range of industry sectors including marine insurers such as P&I clubs, shipowners and charterers.
Read More